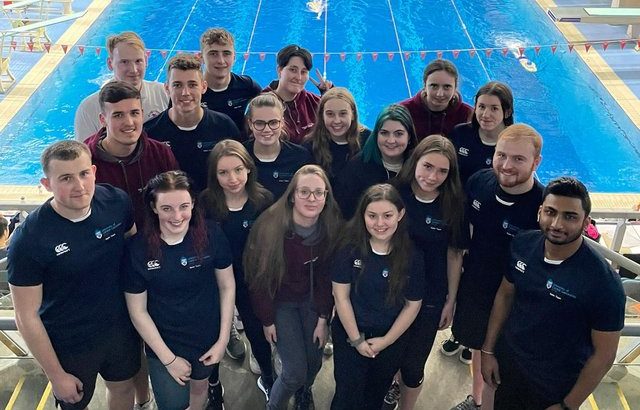 UCLan’s swim team is currently swimming the length of Ukraine – 346.4 miles – in order to help raise money and aid them.

Russia’s invasion of Ukraine has the country in need of support and 20-year-old paramedic science student Emily Kippax decided to take action and try to help.

The first-year student from Southport said: “I thought what could we do, and then I just googled what’s the length of Ukraine and thought that would do really.”

She added: “I did a charity event last year, I did a 1,000 mile bike ride and I saw if you do something big you get people’s attention.”

She brought the idea to the rest of the team and had to do some work to convince them it was possible.

“At first they were like, ‘no we’re not going to be able to do that but when I got something in my head that’s it really, I want to do it.”

Eventually, she was able to get 14 people to participate after just starting with four.

“So I worked out how many lengths it would be for us all, which is 22,000 lengths divided all of us and 203 hours of swimming.”

The swim started March 8 and will be done by the end of this month. They have set up a JustGiving page to collect donations in the meantime and have already collected over £3,000.

Despite Russian and Ukrainian representatives still talking to end the fighting, however, the fighting continues.

“Obviously you’ve seen on the news everything that’s going, seeing like cancer treatments being cancelled and families being torn apart,” added Emily.

“I’m just at home right now and I have nothing to worry about and they are wondering how long food is going to last, I don’t know, it just touched my heart.”

As said on the JustGiving link donations will go towards: