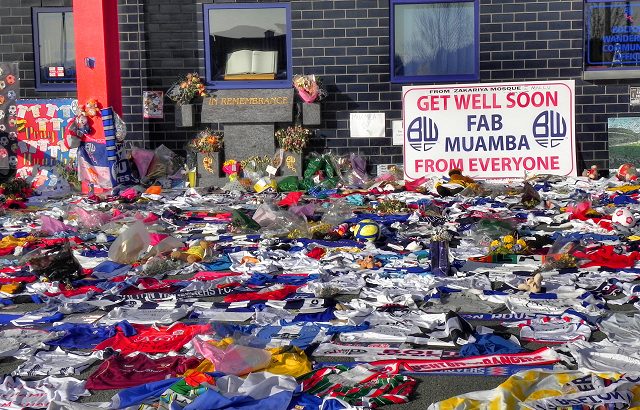 Ten years ago, on 17 March 2012, a shockwave rippled through the footballing world, writes Caleb Wind-Leonard.

The stadium was full, with Trotters and Spurs fans alike hoping for their team to push on to Wembley in the next round.

That was until thoughts of Wembley left everyone’s minds.

Bolton midfielder Fabrice Muamba was down and writhing in pain.

Medical staff were on the pitch instantly, soon joined by a fan who happened to be a consultant cardiologist.

Muamba was clinically dead for 78 minutes, despite defibrillator shocks both on the field and in the ambulance.

He was rushed to hospital where he remained for just under a month.

In August that year, Muamba retired from professional football.

Nine years on from the incident, many were reminded of Muamba’s incident after Danish midfielder Christian Eriksen collapsed at the Euros in a shocking incident.

The ghostwriter of Muamba’s book, I’m Still Standing, Chris Brereton, said: “With Eriksen collapsing, it certainly brought back the memories of what happened to Fabrice.

“Fabrice’s name was in the second or third sentence of every story related to Eriksen because everybody immediately thought back to that time with the Fabrice situation.”

Brereton continued: “It brings it home that at the end of the day it’s only a game.”

“It’s more important that the 22 players all go home to their families after the final whistle.”

Eriksen and Muamba both suffered cardiac arrests, which is where the heart suddenly stops supplying blood to the rest of the body.

Like Muamba, Eriksen received multiple shocks from a defibrillator.

Luckily though, Eriksen was awake in hospital under an hour after the incident and was released from hospital in a matter of days.

While it saw the end of Muamba’s career, the Dane, whose career was thought by many to have been cruelly ended, managed a full recovery and in January moved to Premier League side Brentford to help their fight against relegation.

He has since also returned to the Denmark national team, a feat that almost everyone thought impossible, or at the very least a huge mountain to climb.

In every case like this, such as Eriksen and young Ajax midfielder Abdelhak Nouri, parallels to Muamba are always drawn.

The midfielder, who made 33 appearances for England Under-21s, has since moved on to gain a BA in Sports Journalism, and then took up a role at Rochdale Under-16s to complete his coaching badges.

Muamba’s personality has always been something that has been continuously praised by those around the ex-player.

Brereton said: “Fabrice would be the first person to tell you that he got where he was as a footballer primarily because of his self-discipline, his eagerness to work hard, his hunger, and his willingness to do all the right things.”

After a decade, many lessons have been learned from Muamba’s cardiac arrest.

Defibrillators are now readily available at sports venues and first aid staff are trained to deal with the situation better.

Steps have been taken to ensure that situations such as Muamba’s are always dealt with properly, because that is not always the case.

The aforementioned Nouri was 20 years old when he suffered a brutal cardiac arrhythmia attack in a pre-season match against Werder Bremen.

A cardiac arrhythmia attack is when the heartbeat develops irregularities, causing it to beat either too fast or too slow.

An investigation by Ajax in 2018 found that failures in the medical treatment given to the Dutchman had led to brain damage, prompting his family to file a lawsuit against the Amsterdam club.

In November 2021, a settlement was reached: Ajax payed Nouri’s family €7.85m on top of all past and future medical bills, as well as officially retiring the 34 shirt.

However, many have argued that had the precedent of Muamba’s cardiac arrest not been set, the outcome could have been even worse.

The story of a man such as Muamba needs to be told well, to continue the example and improve the safety of football for everyone.

On that, Brereton said: “Even when you are editing books – you’re editing someone’s life story, that’s a phenomenal amount of responsibility.

“It’s a piece that they want to reflect their lives accurately and tell their story as accurately as possible.

“Getting all of that right sits on the writer’s shoulders.”

The events of 17 March 2012 will sit long in the memories of the football fans who witness them, and the precedent set will last even longer to ensure a much safer sport for all.