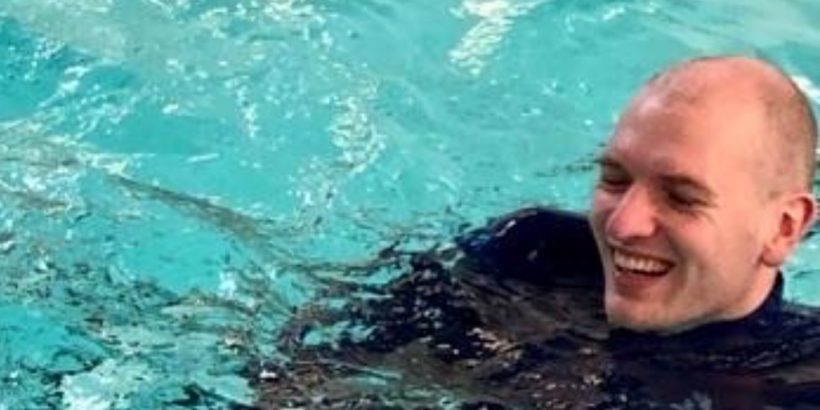 Like thousands of people up and down the country, a swimming teacher from the Isle of Man was dismissed by his GP when he noticed a lump during the Covid-19 lockdown, writes Lucy Roberts.

Will Holden first started instructing poolside when he taught his auntie who has special needs to swim when he was on holiday as a child.

12 years later he’s combined his job as a fitness instructor with teaching kids on the island how to swim.

The 28-year-old was conducting eight lessons a week when he started to notice something was very wrong with his throat.

“I noticed a lump in December 2020, and it was the lockdowns and everything and I do feel like I was sort of pushed to the back of the queue, the GP was like, ‘You’ll be fine, it’s just a sore throat,’ but by then it was probably like stage two or three cancer,” Holden told UCLan Live.

“The new term gaslit is thrown around a lot and you sort of think, ‘Oh I’m fine and you just crack on,’ and eventually the lump grew, and I had this big lump sticking out, but my GP wouldn’t see me until I had my appointment two weeks later.

“I had a scan and the day after I was diagnosed with Hodgkin’s lymphoma.”

The fitness instructor’s diagnosis meant his life was about to temporarily go on pause and he would be dragged away from doing what he loved.

But not before he had one last visit to the pool.

“In May 2021 I had a little biopsy surgery and because I was like, ‘Oh I can’t leave the kids yet,’ after I had the surgery I came back in that day and I was like I’m fine, it’s been stitched up and I was sat on poolside teaching my last two lessons before I had to go,” the Isle of Man resident said.

“Then it was on to the chemotherapy, and I had the standard chemo before they switched me to the aggressive one because they wanted to kill it faster and it batters your body.

“I couldn’t really be around the kids a lot because on chemotherapy you can’t be around young children because it’s quite dangerous, your saliva is toxic, your sweat is toxic, so I had to step right off.”

However, Holden is now awaiting his imminent return to the pool and can’t wait to teach his students again after not seeing them properly in just under a year.

He still isn’t back up to full fitness because of the effect of his chemotherapy treatment but he doesn’t want to wait any longer.

“On the Isle of Man, you do bump into people everywhere and at the village fairs and stuff I’d see the kids and they’d be like, ‘Where’ve you been?’ and I’d be there with no eyebrows like, ‘Oh hi!’,” he explained.

“But I’ve been popping back in now and it’s been really lovely.

“I’m not fully back yet, I’ve only just been hovering on poolside because my body is still very damaged but I’m starting a proper lesson schedule officially on April 10 which I’m really, really excited about, it’s been almost a year since teaching properly.”

The Isle of Man clearly has some amazing swimming teachers who are willing to go above and beyond for their students, but the picture is very different for the rest of the UK.

According to a recent survey conducted by the national governing body for swimming, Swim England, more than four in five swimming pools and schools are struggling to meet the demand for swimming lessons despite pools opening back up after lockdown 12 months ago.

The nationwide shortage of swimming teachers has now hit 6,200 and Swim England predict that half a million people will miss out on confidence and life skills that come with learning to swim as a result.

This is an issue which Holden thinks is a very concerning one.

“It’s going to be really detrimental because living in an archipelago we’ve got so many beaches and so many people go off to Tenerife and Spain for holidays by the sea but there’s so many people in Britain who can’t swim,” Holden said.

“It’s quite shocking and having that lack of teachers is really quite a concern.

“It’s a concern because that education and knowledge around swimming and keeping safe in the water should be introduced as young as possible.”

Not only does there need to be a drive to get more people into swimming coaching and advertising money injected into the sport, but there also needs to be more people like Holden in the world to counteract this issue.