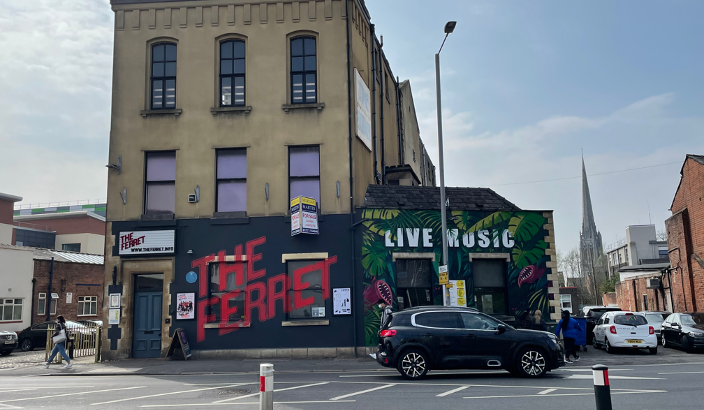 Preston hip hop artist Blackhaine has announced a performance at The Ferret after his work with Kanye West earlier this year.

Blackhaine’s music is described as political, hardcore, and experimental and promises to be an intense night to remember.

Tom Heyes, the mind behind Blackhaine, has had a busy past few months with Kanye West calling him to choreograph his stadium listening parties for his newest record ‘Donda 2’.

The events were in Chicago and Miami and were broadcasted to heaps of viewers all around the world.

He also collaborated with rapper Mykki Blanco in a campaign for designer fashion brand Gucci.

His live shows are described as “deconstructions of their existing sounds and future releases whilst experimenting with genre convention ranging from ambience to hard core punk”.

Growing up in nearby Chorley and working in Leyland, Tom turned to music after feeling there was nothing for him in his environment.

This resulted in his debut EP ‘Armour’, a release that from the offset made him an exciting figure in the UK alternative music scene with its industrial production and sparse vocals.

The news of the show comes after The Ferret was earmarked for flats to be built making it a possibility for the venue to be possibly shut down.

The tour runs from April 8 to May 27 with Preston serving as not only a homecoming show for the artist but as the final show of the tour.

Along with other UK dates, the tour sees Blackhaine appearing all over Europe with shows in France, Belgium, Austria, and The Netherlands.

The tour is in support of his latest release ‘And Salford Falls Apart’, an EP that came out at the back end of last year.

The EP was described by critics as challenging, raw, sombre, and fierce.