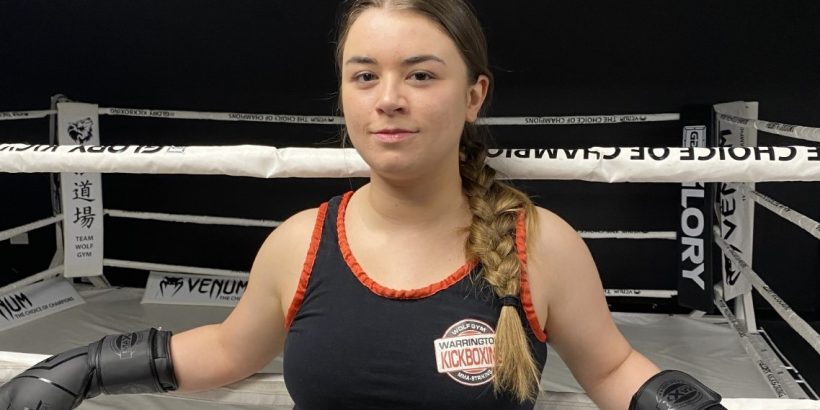 The ability to defend yourself can be the key to self-confidence. Emma Latham talks about how martial arts is empowering women to battle their inner demons.

The air is warm, and the lights shine dimly on the array of striking bags to the right of the training room as Emma stretches and pulls on her gloves.

She is a walking example of how martial arts can help women fight their self-doubt.

Many martial arts groups now provide women’s only defence classes and mixed classes which are welcoming to all capabilities.

Having started kickboxing in November 2021, Emma is an advanced yellow belt which means she has six belts left till she reaches black.

She takes classes weekly and has fallen in love with the sport, discovering that it has not only provided physical benefits but has also been a powerful confidence booster.

She said: “Before kickboxing, my self-confidence was very low and I feel like that had an effect on me in daily life because I was always scared of older men. I always felt really weak around people and I felt like if I was to ever get attacked going to my car, my first thought would be I could never defend myself because I’m only small and I’m a female.”

This is a stark reality in current times. According to the Office for National Statistics (ONS) 40,572 women were victims of sexual assault in the year ending September 2021 in England and Wales.

There has also been a 6% increase in the number of domestic abuse crimes, rising to over 800,000.

Emma described having grown up in a household where her mum’s boyfriend had been verbally abusive and aggressive, crushing her confidence which kickboxing helped her get back.

Now 25, she spoke about her youth as if she could remember it perfectly. Celebratory occasions such as Christmas Eve or New Year’s turned into times of anxiety.

“I’d just have to listen to all the arguing and the things smashing downstairs. You’re just going to be up all night listening to the arguing and thinking, is my mum safe? Like I don’t know if she’s safe or not, and so that was kind of life.

“I feel like there was no escape, so he’d follow me around the house screaming at me and as a teenager I’ve never been shouted at like that before.”

School wasn’t a safe place for her either, as she was bullied and felt incapable of defending herself. Emma recalled that the smallest things became intolerable.

“I was meant to wear glasses since primary school, but because my self-confidence was so low, putting on my glasses in class was like I could physically not do it. I just felt like everyone was looking at me and if any girls laughed in the class, even though it could have been about anything, I always just assumed it was me.”

At 14 years old, one place of refuge was Emma’s room. Cream walls, a double bed and her Xbox formed the space she sought comfort in, as long as her door was completely shut.

She said: “I always had this thing where if the door was slightly ajar, I didn’t feel safe because my safe little box had a little hole in it and so I always had to keep the door closed.”

I just felt very weak and I was always being told that you’d never really live up to anything and you’re pathetic.”

Emma moved out at 20 and became a Neonatal Nurse but feeling weak for so long had left her self-confidence at an ‘all-time low’.

Warrington Kickboxing Studio, also known as the Wolf Gym, was established in 1994 and is where Emma has rebuilt her self-belief in her strength.

The gym was founded by Neil Holden, who has participated in martial arts since he was 10. Now approaching 50, he is the head coach and is a 7th Dan Instructor which requires a minimum of 27 years as an teacher.

Neil explained that many clubs have about 20% participation by female members, but the Wolf Gym is proud that theirs is around 40%.

The women who train there learn a variety of techniques to support them if they were to be attacked, regardless of their size and strength.

Neil said: “A person smaller in stature can seriously hurt a larger opponent with the correct skills. When it comes to a self-defence situation the best thing that you can do is hit very hard, very fast and with strong techniques.”

Within the women’s changing rooms, there are pictures of female fighters on the walls to inspire those passing through as they prepare for a training session. Another shows a belt and states that ‘a white belt is a black belt who never gave up’. A further push to solidify the ladies’ confidence that no matter where they start from, they have it in them to succeed.

When speaking to Neil, he expressed his fondness for female UFC fighters and some of his previous students and their achievements.

“Warrington Kickboxing has had many female members complete the Grading syllabus and achieve their Black Belts. One young lady that I am very proud of is Michelle Preston. She was one of our Black Belts that also competed several times at Amateur level and also at Professional Level.”

The final test of ability is a board break in kickboxing, proving you can break a nose to defend yourself.

Emma didn’t believe she could do it, but after smashing straight through she said: “I was really shocked that I was able to do it and then I just got filled with all this confidence thinking actually I am strong enough.”

She and many others will continue to battle their memories of the past and inspire other women to take up martial arts and realise they’re strong enough.

To get support for domestic abuse you can find help online or visit https://www.nationaldahelpline.org.uk/