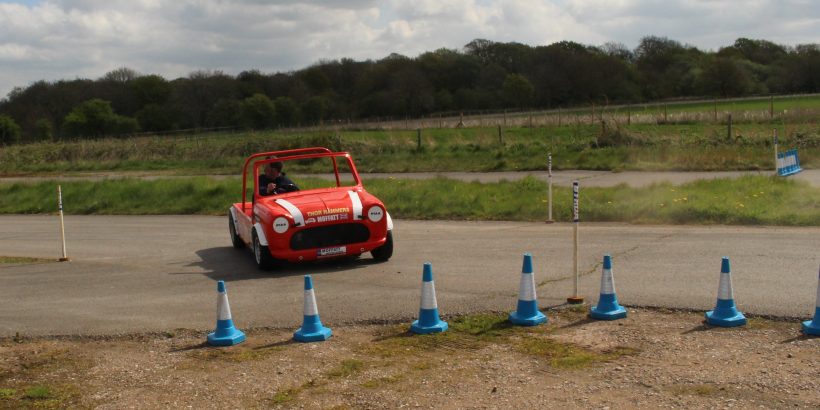 Electric vehicles appear to be the future for the standard vehicle, but what impact will this have on grassroot sports? Jennifer Wardle went along to an AutoTest to find out more…

The introduction of electric vehicles and components on modern day cars is fast becoming the normal and is clearly the future of motorsport.

With the upcoming ban on the sale of new petrol and diesel cars the end of an era is fast approaching for modern day-to-day cars.

But what could the impact be on those grassroot championships that rely on manual components and cheaper running petrol cars to take part.

Alastair Moffat, a five-time British AutoTest Champion has been competing in Autotests since he was 16, the youngest he could start, and has been through many cars, and tires since then.

The 43-year-old believes that the production of Autotest approved cars and components is sure to continue as long as the demand is there.

“I mean, every car is adapted, nowadays, since the escorts, nothing’s been able to be competitive, straight out of the box, really,” he said.

“So, with manufacturers and people’s want to compete in cars, there’s enough people out there producing components and that.

“There will always be some form of adrenaline, so we will overcome any sort of problems.”

Moffatt also thinks that electric may not be the best propulsion for the future due to batteries with the longer range required to compete successfully being too heavy for the light Autotest cars.

But if electric is the only way to go, then he only a few changes will have to be made to introduce electric vehicles in alongside the current running cars.

“I think we will relinquish our overall titles and for electric and then we’ll just have a subsection lower than that, which there is a category for historic cars and a fuel allowance,” Moffat said.

“They’ve been producing them for over 100 years now and electric cars you can’t get the range on them to do a day’s motorsport and drive at home again, without having an electric petrol generator in your boot to get you going at lunch.

Mike Broad, President of the British Trial and Rally Drivers’ Association, which runs an AutoTest championship alongside eight other disciplines is worried about what the future may entail.

Specifically, the effect that the replacement of manual handbrakes with their electronic counterparts could have on the lower end of motorsports.

While it is not a problem for all disciplines it could severely impact and even eradicate some of them such as AutoTests and Car Trials if correct adaptations aren’t made.

AutoTests rely on handbrakes to make the tight turns and quick maneuvers possible as well as shifting between forward and reverse quickly.

“It will make quite a difference to grass roots, the real bottom end of the sport, especially in car trials, and auto tests, on standard car classes within grassroots motorsport and that is a big issue that some really can’t get around,” he said.

“If we are to see the demise of the handbrake over the next 10 years, then that will affect how we do those sports and, long term auto testing may have to adapt different style of tests to accommodate that.”

The President of the BTRDA also warned that grassroots motorsport is falling behind and may continue to do so if marshals and officials are not trained in the new cars.

Also he believes the thinking and planning for electric vehicles has not been as forefront as it should have been for grassroots motorsport and organisers.

“We are not, I do not think making it easy for us to put these vehicles in competition at the moment simply because we’re not training, marshals training officials fast enough to be able to cope with the vehicle,” he added

“I think the message is that we haven’t got our head around this at the moment to the degree that we should have done. And we have got to accelerate all our thinking and adapt our events to be able to accommodate the vehicles.”

However it is not all negative, Broad firmly believes that despite the difficulties that they may face, grassroots motorsport will manage to find a way around the issues created by electric vehicles.

In the end, he feels that the bigger problems may lie with the competitors involved more than the cars but the steps being taken are positive.

“Competition may not be looking like what we’ve got at the minute, but you know, it’s probably easier to accommodate the mechanical ways of cars than it is to get the people’s heads around what they get to do, but it is a positive,” he said.

“There will be a positive attitude to this. I don’t think there’s any doubt motorsport will continue, but it will be different.”

So while there may be challenges to come and some more thinking needed to implement the correct adaptions for electric vehicles in grassroot motorsport, it is not impossible and these disciplines will hopefully be around for years to come.