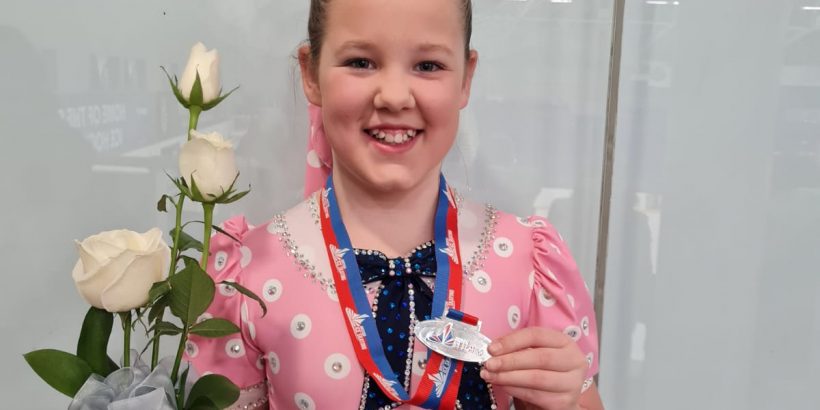 Taking part in a sport as just a hobby is one thing, but to be doing it because you want it to take you all the way to the top requires so much more time and commitment. 12-year-old Darci Rowcroft from Blackpool, is an ice dancer, and the 4th generation in her family to take to the ice, and one day hopes she will get to play out a lifelong dream of hers, representing Great Britain at the Winter Olympics.

Made famous by Torvill and Dean back in the 1980’s, whether it’s through Dancing on Ice, or even the Winter Olympics itself, ice dancing is a sport still done by many.

Figures from 2020 saw that 62,500 people in the UK were still taking part on the ice, and with coronavirus out of the way, competitions are back in full flow.

Recent failures however at the Olympics by Team GB, where they only managed to pick up one gold and one silver medal in Curling, has led to a cause of concern as to where the nation’s next medal hopes could be coming from.

Darci Rowcroft started ice dancing when she was four-years-old, and for her the sport is way more than just a hobby, it’s a part of her day-to-day life.

She wants to go all the way to the top, and is determined to get there, and live out her dream of getting to the Olympics.

“It would be amazing,” Darci said, as she smiled at just the mention of getting to take part in the Olympics..

“You would be showing that you can do it and anybody who says you can’t it will just be like, look I’m at the Olympics and I can.

Darci mixes in her training schedule around her time at school, sometimes completing some of her work on her way into class in the car.

Seven o’clock starts, and five training sessions a week which can last up to two hours at a time can make it gruelling, but she feels as though she has got a good balance between the sport and school.

“I do have quite a good way of doing it because I travel quite a lot to get to school.

“It’s like an half an hour to a 40 minute drive, so I do all my homework in the car like on my computer and then if I have any written stuff I just kind of stay up another 5-10 minutes at night and do it then.”

Torvill and Dean are the highest ever figure skater scorers of all time, after their scintillating display at the 1984 Sarajevo Olympics saw them win gold.

After recently forming a new partnership herself, Darci is looking to emulate the success of her hero’s from years gone by, but there’s also the mental and health aspects of doing exercise, that are also so vitally important in young children as well as the winning.

According to Sport England, there are currently seven million children aged five to 15 in England, and more than half are not doing the recommended daily amount of exercise.

Children are recommended to do at least 60 minutes of activity every day, something Darci feels as though has helped her develop since she first started.

Darci said: “It’s really important because it doesn’t only help you physically, but it also helps you mentally, as it gives you something else to do.

“It’s a great sport to make friends as well, so on a Friday night, we do show skate, so we learn like routines and learn about what you do while you’re away on shows, so all of us lot come together and as friends we make up our own routines.”

Hayley Rowcroft is Darci’s mum, and has supported her on every step of her journey so far.

The 38-year-old mother of two and school teacher at Tarleton Community Primary School, takes Darci to and from her sessions and competitions alongside her husband Stuart, in hope that she will reach her goal.

“If she could get the chance to be at the Olympics it would just be absolutely amazing,” Hayley said, with a similar smile on her face to the one that Darci shared when hearing the word Olympics.

“Unfortunately there isn’t much funding in the sport and we have to fund it ourselves, so we have to travel up to Aberdeen and places like Ayr, but also go down to London to compete in competitions, where we usually just do our training in places nearby such as Blackburn at Planet Ice, and at Blackpool Pleasure Beach.

“Whether she gets to the Olympics or not, and hopefully she will, she still makes us very proud through all her work.”

The next Winter Olympics is four years away in Milan, and Darci’s eyes are now firmly set on doing everything possible to make sure that both her and her partner can be there.

She knows the challenges that lie ahead for her, and the numerous hard training sessions that will take place, but she is determined, and won’t stop until she has reached her dream.