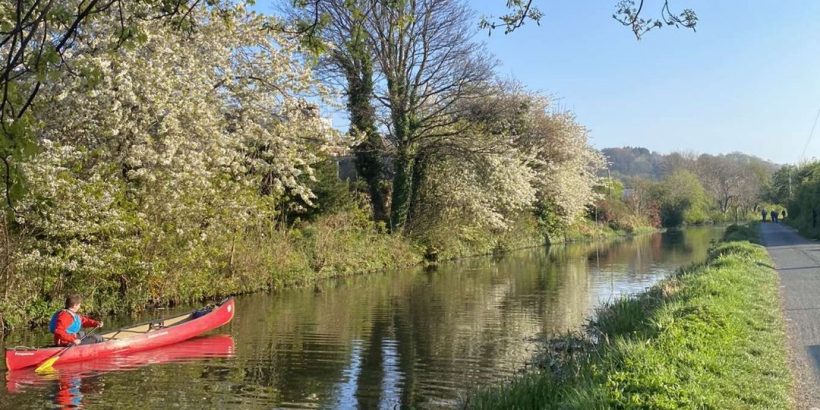 George Brightman from Poulton-le-Fylde was diagnosed with Motoneuron disease in 2020, but he’s overcome the struggles with the help of canoeing.

It was two-time Paralympic gold medal-winning runner Richard Whitehead who once said ‘life need not have limits’ but imagine at 20 being told you are going to lose the ability to use your arms and legs properly ever again. For one young man, this quote certainly reigns true.

George Brightman had a normal childhood, originally born in Swindon before relocating to the Fylde Coast. I first met George in our A level Geography class at Cardinal Newman College in Preston.

George was an avid member of scouting and one of his favourite activities was canoeing, but his route into the sport was very much a family affair.

George said: “I ended up going down to Somerset that summer and my two cousins were already part of the canoe club.”

“I’d been along and watched them and wanted to do it, so I enjoyed it.” He added.

Joining Preston Canoe Club, for years it was just a hobby in George’s busy life. He enrolled on Cyber Security and Forensics at Edinburgh Napier University in 2020 but only a few months in his life changed forever as he was diagnosed with PMA (Progressive Muscular Atrophy). A rare form of Motoneuron Disease

“It was a bit like an ah s**t moment like what do you do with it, who do you tell.” He explained.

“I kind of kept it very quiet and I didn’t tell anybody, and then it was like I’m going to need to because I can’t cope with this. So, I told a few friends and then slowly but surely started telling people.”

PMA affects nerves in the spinal cord and leads to the gradual wasting of muscle mass, and George admits when he first heard the news it was a shock to the system.

“You kind of go through all of the stages of grief at once,” George described. “Because you’re like ah crap I have less of a life to live than everyone else.”

“you’re thinking I want to do everything no, but then you realise I can’t do this anymore, I’m not going to be able to do this.”

Motoneuron disease is a serious life-shortening condition, with half of those diagnosed estimated to have three and a half years left to live according to the NHS.

But George didn’t want to just sit there and worry about the struggles to come and canoeing suddenly became an important part of his life.

“So I already Kayaked before I was diagnosed,” George explained. “I talked to the doctor about it and they said it’s something that would be really good for me because I’m sat in the boat.”

“I went along to a normal standard session at Frome canoe club in Somerset with my cousin and I was chatting to someone there who does quite a lot of stuff who is pretty well connected with British Canoeing.”

He added: “They got me a para canoe assessment and basically all that is here’s your medical evidence, here’s how long you’ve been canoeing, and you get the funding you get training.”

When George returned to university for his second year, he joined the 4th Canoe Club in Edinburgh. He does admit however that canoeing with PMA has its challenges.

Video from my interview of George asking about the challenges of canoeing with motoneuron disease. Credit: Thomas Greenwood

“The challenge of that is working out how to do it all and getting my kit there.” George said. “it’s just quite tricky especially when there’s no bus there or anything because it’s not really on the road. I have to walk there and it’s not particularly easy.”

“I can’t lift a boat on my own, but most people can’t anyway because it’s quite heavy but it’s kind of those little challenges.”

He added: “Just having to ask people for help, and I don’t necessarily want to, because I want to do things by myself.”

Paracanoeing slalom events are run by British Canoeing, but it isn’t an official thing, they organise the races but there aren’t any rankings or leader boards as of yet. George admits this puts him and other Para athletes at a disadvantage.

George was delighted with the achievement, he said: “I was quite chuffed actually that was the first race I did, I hadn’t raced since before Covid.”

“It was quite a good race. Quite a challenging course but I think I was quite lucky because I’ve done that river before, it was a good race and I felt quite proud of myself really, and quite impressed with myself.”

George is hoping for more success in the future although he admits it’s not the winning that matters.

He said: “I just want to race this year, it doesn’t bother, it doesn’t matter to me where I place, I just like racing.”

Matthew Walsh who also attended Cardinal Newman knew George through friends, he admits what George has achieved is inspiring.

He said: “I think he’s done well to keep active even though he’s now got this disability.”

“It’s really impressive what he’s done, I think it’s something we should all aspire to do.”

Around 1100 people are diagnosed with Motoneuron every year in the UK and George has taken his own experience to show that you can still achieve so much.

He explained: So if somebody is getting diagnosed with Motoneuron disease, I just say do what you want, give everything a go that you can.”

“Because you find that most people will adapt around you. but don’t feel like you have to do everything. You can have a lazy day, you can have a rest day, you know if you’re in pain don’t push yourself too much.”

Whilst Paris 2024 certainly isn’t on George’s mind, his will to overcome a condition that should make so much impossible and remain in high spirits I’ve always known him to have is certainly inspiring.