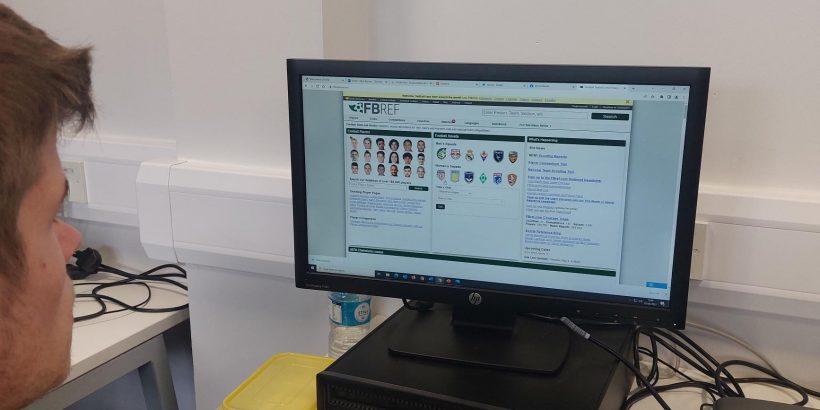 Luton Town have played two full seasons at Championship level since their promotion from England’s third tier in the 2018/19 season, and have shown impressive development since then, so how have the plucky Bedfordshire side managed it?

Football fandom tends to go through phases of support, in the 90s, the fanzines had a big boom in popularity, there have been podcasts, youtube channels, and now fan-alytics.

As the media attention around football has continued to grow more and more since the advent of the Premier League, fans are gaining access and insight into a huge amount of information that would otherwise have been unavailable.

Websites such as fbref, StatsBomb and Opta have all given readers an insight into new statistics with which to judge a player’s performance, ability, suitability to a role and even temperament.

The availability of this information has in turn led to the creation of a very specific niche in the ‘twittersphere’ – the fan analyst. These are people whose love for their club goes further than simply watching the game on a Saturday afternoon and continuing with their week; they instead pore over the pass maps and average position graphics in an attempt to better understand the game, and particularly the team that represents the fans for an hour and a half each week.

Slowly though, this niche is becoming more accepted, and while this is visible through Sky Sports’ acceptance of the xG metric and Jamie Carragher’s analysis of goalkeeping statistics in his Monday Night Football segment, the most startling examples come from those from the twitter analytics sphere who have worked their way into prominent roles at football clubs.

Jon McKenzie is a writer for Analytics FC and runs Leeds United tactics blog All Stats Aren’t We, and he referred to a number of big success stories that can provide an example for aspiring analysts:

“We’re definitely seeing [people making the move to football clubs] more and more. There are people like Tom Worville and Jay Socik who have done that.

“Guys who start their own profile, just start working off their own back and then go from there into the industry. Tom Worville was I think an economics student and was interested in how that could translate to football.

“He and some friend started the company that I work for now, Analytics FC – just writing blog posts essential – and all four now work in the industry. A couple of them work for a top Serie A side, and Sam Gregory works for Inter Miami. Tom Worville has just gone to RB Leipzig via Opta and the Athletic, but it is becoming a tried and tested route.”

It is the aforementioned Jay Socik who is most pertinent to this piece however, plucked from his nearly 30,000 twitter subscribers by Luton Town, who handed him the role of Head of Recruitment Analysis in February 2021.

Luton’s first season in the Championship saw them scrape survival, after a remarkable run of form under returning manager, Nathan Jones. Last season, the Hatters’ battled their way up to mid-table, with many of the old guard from the lower-league days still featuring week-in, week-out.

This summer was a huge one for the club and would have been a daunting task for the most experienced recruitment guru, but for someone who had never faced the pressures of working within a club before, it was a massive responsibility.

Matty Peason, James Collins, Ryan Tunnicliffe and Kazenga LuaLua all departed – these were tried and tested performers for Nathan Jones, with Kiernan Dewsbury-Hall another absence, with the youngster returning to Leicester after the conclusion of his loan.

Blades Analytics – Jay’s twitter account – was based on analysing stats for players and teams to try to educate his followers on a different way of looking at football, and thew players that Luton recruited in the summer are a good example of how this outlook can inform sensible signings.

Fred Onyedinma represents a more versatile version of Kazenga LuaLua, whilst also possessing a higher ceiling. Henri Lansbury and Allan Campbell are great options when trying to account for the loss of Dewsbury-Hall – Lansbury’s passing ability is off the charts whilst he is still a capable enough ball-winner and Campbell is an exceptionally agile player, adept at breaking up opposition attacks, whilst also being able to chip in with goals in the same way that Dewsbury-Hall had done the season before.. With James Collins leaving and Elijah Adebayo already set to take the starting position at the top of the team, an experienced bagsman would be required, Cameron Jerome was brought in due to his solid xG performance, as well as his impressive “duels won” numbers.. All of these players have played a huge part in Luton’s push towards the play-offs, and each player was brought in based on a profile that had needed filling.

Josh Hobbs, who is a freelance writer and scout, has done work looking at Eredivisie and Eliteserien players before, and boasts a Twitter following of 4000 people.

“Using templates and ‘profiles’ you can find players that stand out in certain metrics which help you identify what their best attributes are. Then from there you have to go and watch them to find out if that’s actually true or whether they are being boosted by contextual things like being in a really strong team, playing in a bad league or just the style of their tactics boosts certain elements of their game (ie pressing – their whole team might be pressing loads, it doesn’t necessarily make them a great presser).

“Data is a really helpful place to filter down a list, then the eye test and some other factors will help you choose your favourite targets.”

This balance has already started to revitalise the football transfer world, with Brentford and Brighton using it to good effect in the Premier League. After all, clubs would rather have a suitable player for a system – such as Dejan Kulusevski – than an expensive failure.