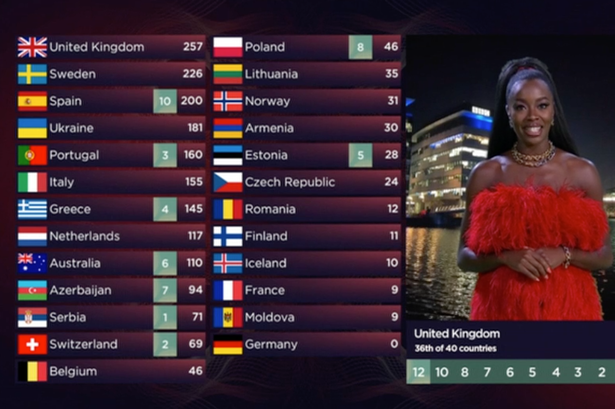 Millions of viewers watched across Europe as the UK’s twelve points were awarded to Spain by AJ Odudu live from Salford Quays in Greater Manchester rather than the usual location of London.

For the first time in history, viewers heard ‘Salford Calling’ instead of the expected ‘London Calling’ from the TV presenter who comes from Blackburn.

An average of 8.9m UK viewers tuned in to watch the moment at the final in Turin Italy, with a peak of 10.6m. High viewing figures were also recorded for the contests host country with 6.6m, Germany with 6.5m and Spain with 6.8m.

UK entry – Sam Ryder – had Eurovision fans across the country on the edge of their seats, as his track Space Man helped to catapult him to the top of the jury vote.

Sam rose to fame during the pandemic as he gained thousands of followers by posting videos of himself covering famous tracks on Tik Tok.

John Gilmore, presenter at BBC Radio Lancashire explained how excited he was to see the UK do so well in the competition and see the North West featured.

“It was great to see Salford mentioned on the Eurovision map,” he said.

“Sam was brilliant, and I wonder how much of his success is down to his enormous following on social media.”

The UK finished second with a total of 466 points as Ukraine sailed past them to first place after receiving 439 points from the public vote, this left them with 631 in total.

Fans took to Twitter to express both their excitement and disbelief at the UK doing so well, after James Newman received no points at Eurovision 2021. One fan wrote “do my eyes deceive me? Is it time?!” while another wrote “Oh my goodness! Pinch me.”

The last time the UK came this close to winning the competition was in 1998, when Imaani came second with Where Are you?

Sam joins Mary Hopkin, Buck’s Fizz, Lulu, Kathy Kirby and Katrina and The Waves as the most successful Eurovision acts to represent the UK.