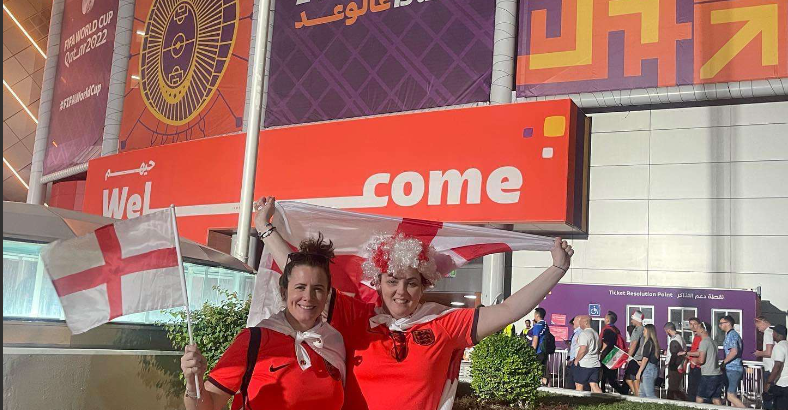 A Radcliffe LGBT couple have returned from a World Cup game in Qatar praising the country for how welcome they felt.

Nicola Murphy-Lunn and her wife Joanna travelled to watch the England versus Iran game last Monday.

Homosexuals in Qatar can face up to seven years in jail for engaging in same-sex activity according to Qatar’s 2004 penal code.

Nicola said: “We arrived and we were shown nothing but respect, and were really welcome.

“And we felt safe the entire time we were there.”

Nicola also reported that locals invited her and her family for Arabic coffees and food in their houses.

She added: “We would definitely go back to Qatar.”

The couple originally decided to travel to Qatar to meet Joanna’s sister, whose husband has been working on the World Cup as a surveyor.

The FA decided against England players wearing ‘OneLove’ armbands for their opening match against Iran due to FIFA’s strict rules banning the slogan.

Nicola said: “I would be so proud if one of our boys did what he [referring to German goalkeeper Manuel Neuer who did wear the armband] did.

“Just like how the Iranian players didn’t sing the national anthem because of the troubles for women’s rights in their country.”

Despite the warm welcome, Nicola stated that she was still cautious of her wife touching the back of her head for fear of offending Qataris.

England ran out 6-2 winners, with Bukayo Saka grabbing a brace, and are currently top of their group despite drawing 0-0 with the USA on Friday.