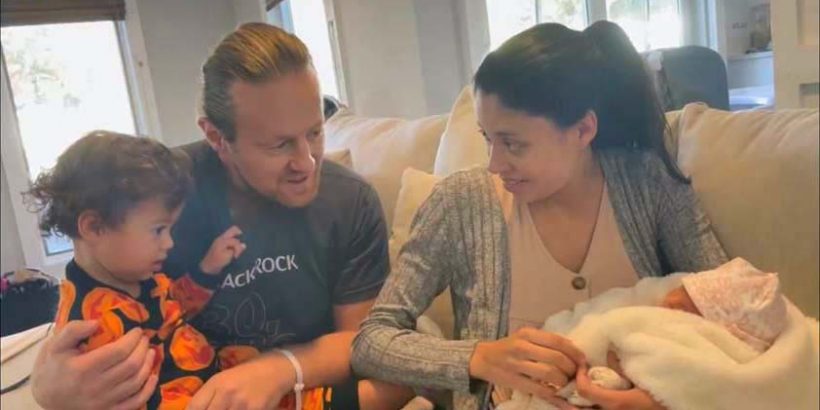 A British man had to bite through the umbilical cord of his newborn baby after he delivered her on a cold rainy night on a remote New York highway.

Anthony Brockbank’s wife Victoria’s waters broke at their home in Bohemia, Long Island, New York on 31 October 2022, but they were unable to make it to hospital in time after being told to stay at home by a midwife.

But as her contractions intensified, Anthony, from Preston, Lancashire, was forced to rush Victoria, a native New Yorker, to hospital.

Anthony said: “When the contractions started, they came quickly and intensified, Victoria was on the bathroom floor and struggled to stand up, but I managed to get her into the car.”

From their home, it is a twenty-minute drive to Stonybrook Hospital.

Twelve minutes into the journey, Anthony said Victoria screamed the baby is coming right now and he pulled over to the sideway.

Anthony positioned Victoria with her legs dangled from the passenger seat onto the grass verge, with only the light in the car for visibility.

He said the crown of the head was visible, and he began to panic but Victoria was calm but nervous.

The midwife told them if the crown of the head is visible only one push is needed, and the baby would be delivered.

Anthony said: “I was on my knees in the dark and rain, Victoria pushed once, and the baby was delivered into my hands, but the umbilical cord was tightly tangled around the newborn’s neck.”

Because of the position of the umbilical cord, the baby’s life was still in danger so Anthony acted with no instruction from the midwife.

He said: “I instinctively grabbed the umbilical cord, chewed through it and removed it from the newborn’s neck, but the baby was not conscious, and the eyes were still shut.”

He added: “I chewed through the umbilical cord easily; it had the same texture as calamari.”

The midwife advised him to rub its chest, the baby opened its eyes and started to cry.

Anthony delicately placed the baby on Victoria’s chest, and she took a photograph minutes later.

The baby was born at 10.45pm on Halloween but in all the drama and excitement, they did not know the gender of the baby as they completed the drive to the hospital.

They were blessed with a baby girl, her name Zoe, which is the Greek meaning for life.

Anthony and Victoria were both physically, and mentally, exhausted and overcome with emotion but they were then confined in an isolation room for one week because they assessed positive for Covid.

Anthony is Assistant Director of Youth Football at Gjoa sporting club, created by Norwegian immigrants in 1911 and the oldest football club in New York.