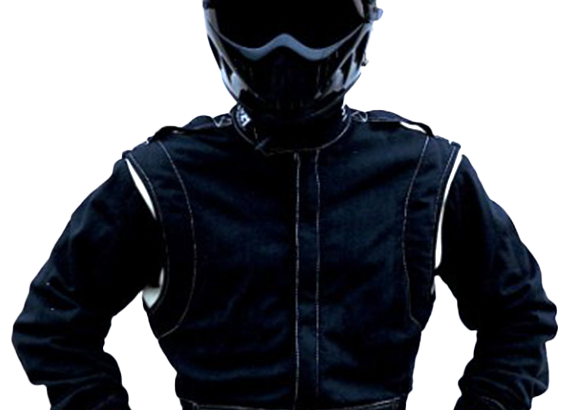 It’s job is simply to go out there and drive fast – a phrase Jeremy Clarkson used when The Stig was introduced to our screens in 2002.

But this is not the story of The Stig, for the man behind the visor, Perry McCarthy, has a far more interesting tale to tell.

That’s because Perry’s short stint in F1 was with the disgraced Andrea Moda team that only ever reached nine weekends in the 1992 season.

This is the story of The Stig’s miraculous journey to Formula 1, and the chaos he found when he got there.

Leaving his job on an oil rig at the age of 21 to become a racing driver, Perry’s career was unconventional from the get-go.

During his time in junior categories, he would find numerous ways to find funds, even signing the equity of his home to Ron Tauranac, owner of Team Ralt.

“I put the house against a limited programme with the Ralt team.

“They had been dominating, but then they built a dog of a car and different drivers weren’t qualifying it.

“It was worth the risk because if I could get the car on the grid, people are going to say, ‘wow.’

“And that’s what happened.”

Although Perry would retire from two races and finish 16th in the other, simply qualifying was an achievement.

But no offers came. The funding dried up. Perry’s dream seemed to be dead.

But in 1992, a shoe designer named Andrea Sassetti bought Coloni F1 and renamed it Andrea Moda.

Signing Alex Caffi and Enrico Bertaggia, things seemed to get off to a good start. But utter chaos was soon to follow.

The team were denied entry to the opening round after not paying the entry fee, and were then banned in Mexico due to illegal cars.

The drivers spoke out against the team. Sassetti reacted by firing them instantly.

“It was a fledgling team but it was a chance,” said McCarthy.

“After all these years, this was my opening.

“I rolled the dice and prayed to god.”

Despite his strong reputation, he was stripped of his F1 super license at the Brazilian Grand Prix.

After failing to race a full season in F3000, he was deemed ineligible to compete in F1.

After appealing to the F1 commission, made up of Frank Williams, Ron Dennis, Max Mosley, and other leading figures in F1, his license would be reinstated.

“That was quite a proud achievement.

“I don’t think anybody got into F1 by having the public confidence of other team principals.”

But behind the scenes, a familiar face had returned. Bertaggia was back and this time he had come knocking with one million dollars in sponsorship.

Sassetti’s eyes lit up and moved to have Perry replaced, but the FIA blocked the attempt, telling him he had already changed drivers too many times.

Sassetti took this personally, and took it upon himself to find any way to get Perry to quit.

As the now-F1 driver touched down in Spain, he was ready and waiting for the VIP treatment.

“I had a hotel with six other beds in it which the mechanics were sleeping in.

“But I knew that they’d take me with them.

“When I woke up, there was nobody in the room.

“It was 7.30 and pre-qualifying started at eight. I was on the other side of Barcelona!

“Andrea’s brother came into the hotel still tipsy from a night out, and he agreed to drive me flat out across Barcelona to the track.”

Finally, he was ready to get started in Formula 1.

The sleek, black car was ready and his helmet was on.

The mechanics pressed the button to start the engine.

The car exploded into flames.

Incredibly, it still worked, and was ready to go minutes later.

This was it – F1. Perry switched the pit limiter off, drove out and prepared himself.

Just 18 metres later, the car rolled to a swift stop, the record for the shortest F1 debut for any driver in history.

In Monaco, it got even more dangerous.

The team didn’t make him a proper seat and left him to bounce around in the car, driving with blurred vision at one of the most difficult tracks in the world.

Somehow, the worst was still to come.

In Canada, the team failed to pay Judd for their engines, and Perry would not even race.

In France, the team itself didn’t turn up, blaming French lorry strikes. All the other teams made it with ease.

In Britain, the team would once again put his life at risk, sending him out onto a dry circuit on wet tyres.

“Those tyres broke within one lap. And I’d still gone fastest on my first.

“I think I got lucky the car broke because I was about to seriously hurt myself. I’d lost my temper.”

While all of this was going on, Perry’s wife, Karen, was unaware of the danger her husband was in.

“I didn’t really let on to Karen just how bad it was. I’d get back and she’d notice I was quiet because I had taken a blow to the head.

“I didn’t tend to say what happened. I kept it to myself.”

As the F1 circus moved to Hungary, Andrea Moda were under supervision by the FIA, telling the team that if they weren’t going to support Perry, they would be kicked out of the sport.

Andrea Moda responded by only allowing him out of the pits with 45 seconds to go in qualifying.

Up next, Belgium, Spa – one of the most daunting tracks in the world, a four-mile blast around the Ardenne Forest with one of the most famous corners of them all, Eau Rouge.

An elevation change of 35 metres, the blind sweeping corner has caused many accidents, and many deaths.

With this in mind, Perry went out on to the track for pre-qualifying, flying towards Eau Rouge at 180mph.

When he reached the corner, something was wrong. His steering rack was broken.

“They knew it was faulty, they’d tested it on Roberto’s car. It was nearly the end of me.

“I don’t think they were trying to kill me. It was incompetence.

Before he could confront Sassetti, the team owner was arrested in the paddock for forging invoices.

The team was kicked out, the nightmare was over, Perry was done.

“I’d already been above stupid to continue with this team in the first place.”

This was the end of Andrea Moda, the worst F1 team of all time.

Ten years later, Perry released a book, telling his story in F1. At the book’s launch party, he was approached by Jeremy Clarkson, who was preparing to bring Top Gear back to TV screens across the nation.

“That’s when we started talking about the secret racing driver. I really liked the idea of being grumpy and dismissive, knowing nothing but being a racing driver.”

Donning an all black race suit, Perry would be known as The Stig, putting new cars through their paces around the Top Gear test track.

Following two series on the show, he left to go back to racing.

“It really wasn’t my cup of tea. I’m a racing driver, not a test driver, but every car I got in as The Stig, I gave it everything.”

McCarthy has since worked as a pundit, the story of Andrea Moda making him a house- hold name to fans.

Jake Sanson, who has worked alongside the now-61-year-old, believes that there is still an element of regret in Perry’s mind.

While there is a glint in his eye every time he talks about it, you can still sense this silent frustration in him,” Sanson explained.

Whether you see his F1 story as a missed opportunity or as a joke, there is one certainty.

He got there. He reached his childhood dream. He became an F1 driver.

Although maybe not for the reasons he wanted, The Stig’s F1 story will be remembred by the sport’s fans forever.