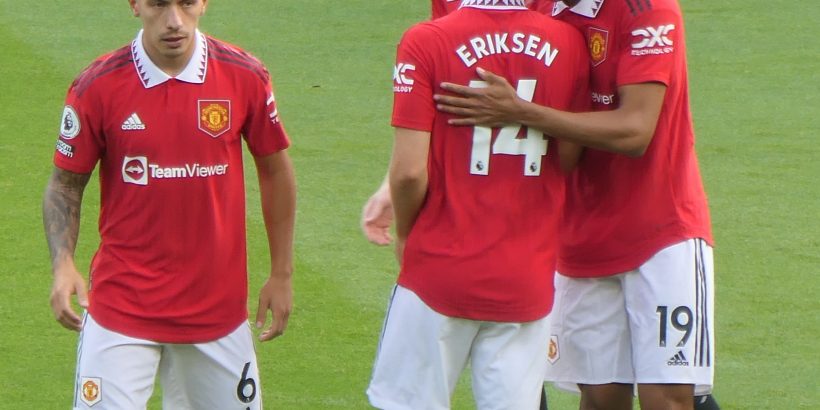 After last minute heartbreak at the Emirates Stadium, Manchester United find themselves 11 points behind Premier League leaders Arsenal, so what now for the Red Devils?

Erik ten Hag’s resurgent United side were suddenly just five points off the summit of the English football when they went a goal ahead, but come full time, that margin was extended by six after goals from Eddie Nketiah and Bukayo Saka saw Mikel Arteta’s side take a 3-2 win on home soil.

Now at least four wins off the Gunners, league chances look slim, but with two domestic cups still to play for and a Europa League knock-out meeting with La Liga leaders Barcelona lined up, there’s still plenty to play for on another three fronts (League Cup, FA Cup and Europa League).

One United fan who felt his side can still hold their hopes up was social media influencer and former Devil in the Detail podcaster Dylan Connolly – also known as @dylsfootyramble on TikTok.

The 24-year-old, from Preston, said: “I was never seriously expecting us to mount a sustained title charge this season but as a United fan it would’ve been nice to have been in the conversation a little longer.

“If we’d have got to April and the gap was only seven or eight points and results go your way it’s possible but we have shown that there is progress there with this team.

“We’ve got to play Nottingham Forest in the League Cup this week and if we beat them over the two legs, we’ve got the chance to get our hands on a trophy and if we can pair that with a top four place, I think that’d be a pretty good season.

“We’ve put in good performances against the likes of Arsenal, Chelsea, Tottenham and Liverpool, and if we can manage to finish third or fourth with a trophy after how bad we were last season, that’s a massive step in the right direction.”

In ten Hag’s first season at Old Trafford, after 20 league games, his side sit in a higher league position than at the same stage last season, with seven more points and three more wins, a record Connelly insisted should be trusted by the Red Devils’ fans.

He added: “When you look at Mikel Arteta, it took him three years to get Arsenal to where they are now, competing at the top end so I think with ten Hag, even though he’s spent a bit of money, he’s got us playing well and up at the top end to start putting us in the conversation for success again.

“He’s installed belief that we can go and beat the bigger teams again and take the game to them as a minimum.

“We are doing well and at the start of the season you wouldn’t have expected us to be winning the league so I think there’s a lot to be positive about with what’s still on offer this season.”

Despite been just a point off rivals Manchester City after running out 2-1 winners in the Manchester derby last weekend, United are now six points behind the Citizens and also six points inside the Champions League qualification places.

With fifth placed Tottenham Hotspur still to play, the influencer with nearly 50,000 followers felt the 13-time Premier League winners should prioritise finishing in the top four – but could see the attraction of silverware elsewhere.

“Personally, I think the priority has to be the league although we are probably one of the stronger teams in the Europa League.

“Knockout football is all about moments really and in that competition alone there are some very strong teams like Arsenal, Barcelona and Juventus so I think to get into the Champions League we need to get there by finishing in the top four rather than taking a gamble and trying to win that competition.

“If we were going to win a cup competition, I’d love us to win the FA Cup because of the history behind it and just to see our name alongside it again.

“Any cup win would great though to get us back into the winners’ circle but it’ll be tough because although we’ve got a big squad, there’s not a lot of quality in depth so I think we have to utilise our best squad in the league to get us amongst the elite again next year.”