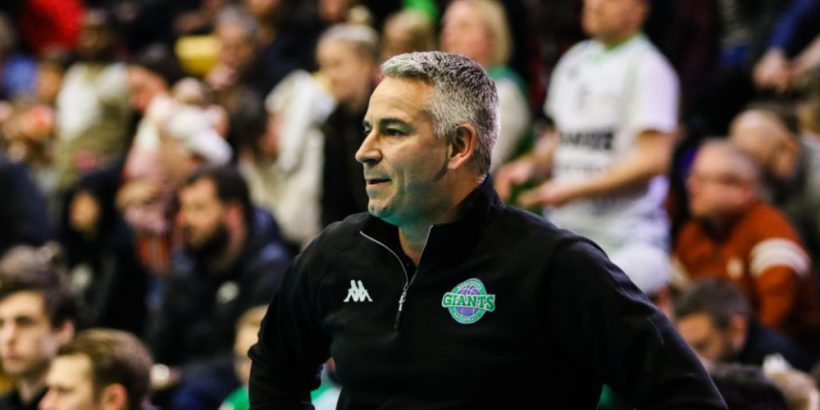 A narrow four-point win saw the Cheshire Phoenix beat local rivals Manchester Giants, the win pushes them one place ahead in the British Basketball League placing them in 4th and rivals Giants in 5th.

A North-West rivalry that never fails to live up to expectations, with both teams beating each other this season, leaving the series at 1-1.

“We had a slow start, the first five or six minutes but we recognised that and made a couple of changes,” said Danny Byrne (pictured above), assistant manager at Cheshire Phoenix who left the Manchester Giants in 2021.

“We were slowly getting back into it, and once we took the lead the momentum took us all the way through and eventually completed a good win.”

Cheshire Phoenix were coming off the back of a loss during the week at the hands of the Riders, ultimately ending their three-game win streak. A win against the Giants was a much-needed morale boost for the players which was evident from the energy the fans in attendance had at the Cheshire Oaks Arena.

“It’s important to have a family atmosphere when we play in here, that really gets the venue rocking and helps us perform how we know we can.

“It’s important to showcase what we do for the kids because we are always going to need the next generation of basketball players.

“Without the next generation there is no sport, so it’s important to showcase what we do,” Byrne added.

Byrne joined the Cheshire Phoenix as James Brice’s right-hand man from the Giants in 2021 so it’s more than a local rivalry for the assistant manager.

“It’s always good to beat your nearest rivals and being the former head coach of Manchester Giants makes it that little bit sweeter when you beat your former team.”

With only six games remaining for the Cheshire Phoenix, they’ll look to finish the regular season strong and although an optimistic goal, a push for the league title is still in reach.

Ending the series between the two sides at Manchester Giants venue the National Basketball Performance Centre on April 7, a much-anticipated rematch is upcoming.

“We’ve got to play one more time back at their place. So, we’ll lead them by one at the minute, I’m sure they’ll come out swinging come April.

“But we want to go there and take one off their court and clean the series up at three.

“A local derby is always important here, no matter whether we are at the bottom table/top of the table and vice versa. You always want to beat your nearest rivals no matter what,” said Byrne.

Looking forward to their next fixture against league leaders the London Lions next Friday, Byrne shared an inviting welcome to any new fans wishing to be involved to come down and witness Phoenix’s possible title push.